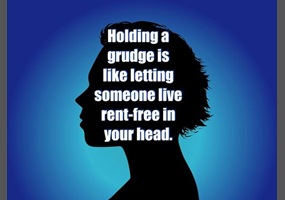 No More Grudges for Joel:
Are you holding a grudge against anyone? If you had asked me this question last week, my answer would have been, NO. I’ve always considered myself to be one that quickly moves on once someone offends or tries to push my button. You see, my thoughts were it is easy to let stuff roll off your shoulder from people who are not in your inner circle. My wife and I were talking last night at the Dallas Stars game about the Dallas hockey fans holding a two-year grudge against a player for Anaheim. The fan explained the reason they booed this player, Mr. Corey Perry, was because of an incident two years ago in the playoffs. I laughed at how funny it is for fans to hold a grudge for so long. I’m reminded of an Andy Griffith episode about two families who were fighting so long that no one remembered why. They families were taught from birth to hold a grudge against the other family.

I realized that I’ve carried a grudge since 1998 against Reggie Miller. Who is Reggie Miller? Reggie Miller played professional basketball for the Indiana Pacers for nearly fifteen years. So, why would I have an issue with Reggie Miller? Did he steal my girlfriend? Did I lose a bet and cost me some money? No. I realize the reason I have not liked Reggie Miller is because of something he did in 1999. Reggie pushed off Michael Jordan to hit this last second shot and because I am a Michael Jordan fan, I have not liked Reggie since. Here is a link to the play that upset me,https://youtu.be/kbL5U3MUzWA. As you can see, Reggie pushed off which should have been a foul. I know it sounds crazy, but it is true. I’m not proud to admit it.

What about you? Are you holding a grudge against someone? A parent, ex-girlfriend, classmate, family member, neighbor, co-worker or spouse? Is it time to move on? Yes, I’ve learned that grudges prevent one from moving into their purpose. A grudge is like a 50lb bag on your back, you adjust to the weight, but it still causes damage to the body.

I challenge you to do what I have to do….move on. Forgive your Reggie Miller and move forward. I’m not saying Reggie didn’t push off, I’m saying- Michael moved on and so should I. When the dust settled, Michael and the Bulls won another championship. I guess it is time for me to let the offense go and live my life. When I think about it, my grudge only affected me since Reggie Miller did not do anything against me. I’ve held a little grudge for too many years and I must say, it is over.

Please join me in saying, “It is Over.”

Here is a quote regarding this topic.