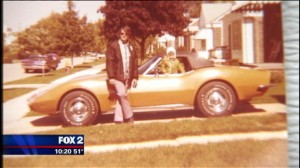 The picture you see here is of Scott Bachman, his father and Dad’s 1973 convertible Corvette. That’s Scott standing up in the driver’s seat with the football helmet—probably advisable headgear if he was actually planning to take it for a spin.

That car reminded Scott of his father like nothing else. Which is why, earlier this year, Scott went on a quest to track down and buy that ’73 ‘Vette. Not just a 1973 Corvette convertible that looked kind of the same. The very same one.

According to Fox 2 in Detroit, Scott started dreaming about the car this May—dreams so real that, eventually, he told his wife that he was going to buy it. Scott had kept the ‘Vette’s VIN number. So, after a little poking around online, he found the current owner and made an offer, which was accepted.

“It wasn’t until I got into the seat and put my hand on the steering wheel that I felt like I really connected with him again,” Scott told Fox 2.

Not many of us would repurchase an old car as a sort of chrome-plated memento of our own fathers. But most of us have possessions that remind us of loved ones no longer with us: A watch. A chair. A tool belt. As I said last week, stuff matters—if it’s filled with memories. It makes us feel closer to our dearly departed.

But in an age where much of our living is done online, do we have as many tangible reminders to pass on? When we’re gone, what will remind our children of us?

It’s a little trickier now. But it’s doable. And maybe even easier in some ways.

I don’t have a lot of cool stuff to pass down to my kids. I don’t have a nifty collectible car dining room table I carved from a felled tree in the backyard. My tool of trade—my computer—was obsolete five seconds out of the box. I’d imagine that many of us are in the same boat: Cubicle workplaces, alas, are rarely filled with ready-to-go heirlooms. Sometimes are hobbies are wrapped up in pretty disposable stuff. No one, I’d imagine, will want my worn-out running shoes when I’m gone.

But I do have an advantage that some folks don’t: I’m a writer. And much of my stuff is somewhere online, floating in the ether. This blog post, for better or worse, will outlive me. And if my children ever get a hankering to hear me long after I’m gone, they’ll be able to do so (after a fashion) with a simple Google search.

Not every dad writes or blogs, of course. But most of us probably have some sort of online presence—pictures and flyaway posts that might be little online pearls of wisdom for our kids. And if we feel that our 2014 Facebook witticisms aren’t quite how we’d like our kids to remember us, we can become a little more intentional: We can start journals that catalogue our thoughts and feelings as our kids grow up. We can even record ourselves reading to them, so they’ll remember the rise and fall of our voice.

If we’re not so comfortable writing or can’t stand the sounds of our own voice or, really, want to stay away from all that computerized memory-making entirely, we can do other things: Collect little treasures that we picked up together and put them in a box to give them when they’re older—a rock that your 3-year-old daughter thought was the most beautiful thing on earth (before she forgot about it), a ticket stub to a football game, a copy of a book that means something to you and you want to pass on to them. You can jot down little notes on why these things are important to you. Or you can simply look through the box when they’re older and/or grown and tell them yourself before passing the whole works on.

But no matter what, we should take the time to create memories with our kids. Give them moments to treasure. Times to embrace and recollect and retell to their own kids. Those times are, after all, what makes the rest of what I’m talking about worth anything—and worth more than even a classic Corvette ever could be.

About Paul Asay
Paul Asay (@AsayPaul) is a contributor for Dad Matters and a senior associate editor for PluggedIn.com.